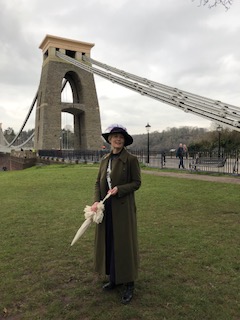 I have been to Bristol a few times but do not know it well. I had the wonderful company of my friends Emma and Giselle.

Prior to my visit I was lucky to connect with some of today's inspirational Bristolian women and discover more about the history and the fantastic work that's going on in Bristol today. I spoke to authors Jane Duffus and Lucienne Boyce. Penny Gane, Chair of Bristol Women's Voice and Ellie Vowels, Coordinator - Bristol Women's Voice. Thank you, all of you, for taking the time to talk to me.

Clutching the map from 'The Bristol Suffragettes' by Lucienne Boyce, an e-map from Jane Duffus (author of 'The Women who built Bristol') and Emma's local knowledge we alighted at Bristol Temple Meads with a plan and much anticipation. First stop was Harts Bakery. Although not  suffragette related it was full of delicious cakes. We settled in to plot our course and soon, we too were full of delicious cakes. (It is well documented that suffragettes had a lot of time for cake.)

Bristol has a history of strong, independent and intrepid women. We went to follow in the footsteps of a few of them.

First stop was one of the lodging houses where Annie Kenney lived. Annie was a bit of a suffragette superstar. She was a mill worker from Lancashire who lost a finger to a whirling bobbin but carried on there and became active in the trade union movement. As I discovered in Manchester, Annie joined the WSPU and was arrested with Christabel Pankhurst in 1905 at the start of militant action. Annie spent some time in London helping to set up WSPU HQ and then went to Bristol to found the Bristol and West of England Chapter.


Bristol already had a long history of women's activism and strong feminist groups who had campaigned for married women to own property in their own right, against the incarceration of prostitutes (Ladies' National Association for the Repeal of Contagious Diseases Act), founded the Women's Liberal Association and were members of the NWUSS. Annie was able to tap into this existing pool and mobilise support for the WSPU across the West.

We then visited the Victoria Rooms which held talks by the Suffragette leaders as well as Oscar Wilde  and Charles Dickens. Annie Kenney and Clara Codd held 'At Home' meetings in people's homes until they grew too large and were moved here to accommodate the numbers. The rooms had hosted suffrage and women's rights meetings from the 1870's. The building is now home to Bristol University's Music Department.

We then failed navigation completely and despite being equipped with two i-phone map tools and a paper map we wandered off in the wrong direction but came across a lovely crescent and spied a blue plaque for novelist E.H. Young (the E stands for Emily, of course, a name which was pretty much compulsory in those days). A quick google revealed that this was no ordinary lady, of course she was a supporter of women's suffrage and a bestselling novelist. Author of 13 novels, the most popular was 'Miss Mole' about an sharply intelligent spinster (some current reviews here).


Emily had quite the unconventional love life, taking one of her husband's friends as a lover and then, after the death of her husband in the war, moving to live with her lover and his wife in a menage a trois. Racy.

I now want to read her novels.

On the way to our next stop we passed an Oxfam with the most fabulous typewriter in the window. I had to go in and have a look at this strange batwing configuration. It was a No. 9 from Chicago. How I wish it could speak to me and recount everything that had been typed on it and  by whom... I had to run my fingers over the keys and imagine that. (It's £100 if you want it - it may still be there).

We proceeded to 16 Arlington Villas to visit another home of Annie Kenney. This is where she lived during the 1911 census (although she wasn't at home when they came to call of course).


We stopped for a cup of tea (alright it was a gin & tonic) in Clifton before wending our way down to Charlotte Street to pay homage to the birthplace of Emmeline Pethwick-Lawrence. She moved to London at 24 and volunteered as a social worker. She was courted by a wealthy lawyer, Fredrick Lawrence (but would only consent to marry him after he promised to become a socialist). Their marriage was based on strong ideas of equality. For the time it was extraordinary that they both double-barrelled their names and kept separate bank accounts to retain their independence.

The pair were responsible for funding and editing the Suffragette newspaper  'Votes for Women'. Emmeline was the treasurer for the WSPU and an accomplished public speaker. She toured the country giving speeches and raising funds. She was arrested multiple times (as was Fredrick who did a nine month spell in Brixton prison). They eventually split with the WSPU as they disagreed with the more militant activities and joined the United Suffragists, which aimed to unite the militant and non-militant, men and women for universal suffrage.

We paused to gawp at a Banksy on the way down the hill to Bristol Cathedral where in 1914 a group of suffragettes interrupted the sermon to pray for Emmeline Pankhurst's health (which was failing after so many force feedings in prison). Surprisingly, nothing bad happened to them, they weren't even arrested and they gave a copy of Christabel Pankhurst's book to the preacher. We tried to get inside but we couldn't find an entrance even though the sign said it was open (that's why I look cross outside the locked gate).

As it was some distance to Temple Meads we hopped on the water ferry which was a treat and then on the train we met some young men from my era. We had a lively conversation about universal suffrage and the plight of working class men who fought in WW1 but didn't have the vote either. A thrilling end to the day!


Huge thanks to Giselle and Emma for company, feeding me and making me laugh so hard outside 16 Arlington Villas.


If you met me along the way or just enjoyed this blog please support my efforts and donate - any amount - to the critical work CARE do to raise women and girls out of poverty across the world - thank you. Either on the link below or Text SUFF98 £3 to 70070  (£3 is a suggestion - any amount appreciated).