March 21, 2018
Well, the weather was freezing, it was wild, windy and snowing but nevertheless, I persisted in carrying out my planned walk of London (with trusty companions, Ruth and Marcus). 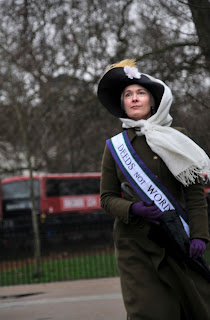 There are so many suffragette related sites in London I couldn't visit them all. Therefore I walked between some major sites and stopped off at two special, centenary events.

Hyde Park was the scene of regular suffragette meetings and speeches. It was also where, on June 21st 1908, a spectacular procession, a 'monster meeting' took place. 30,000 suffragettes carrying 700 banners converged and drew crowds of 300,000 - 500,000 onlookers. This marked the introduction of the  WSPU 'brand colours' of green, white and purple. It was the largest number of people gathered in Hyde Park for political purpose (source: Kent.ac.uk) and the park was awash with suffragette colours in the clothing, banners and sashes of the activists.

The colours had meaning - purple for dignity and loyalty, white for purity and green for hope. People all over the country wore them to signify their support for the cause.

My next stop was Selfridges, surprisingly an ally of the suffragettes. At a time when window smashing became one of the main forms of militant political expression and shop windows throughout the West end were targeted, Selfridges remained unscathed. According to their website "Harry Gordon Selfridge was a big supporter of the Suffragettes, creating window displays championing the cause (in fact, Selfridges was one of the only stores on Oxford Street not to have its windows smashed by the Suffragettes)." (http://www.selfridges.com/GB/en/features/articles/selfridges-loves/selfridges-lovesourhousesecrets)


From Selfridges we proceeded to Argyll Street, where once the suffragette 'bodyguard' gathered at the Palladium Academy Dance school to train with Edith Garrud. They were not learning to dance.

Edith was introduced to self-defense by Edward William Barton-Wright the founder of martial art Bartitsu and then studied Jiujitsu with Uyenishi. She taught the suffragette 'bodyguard' these techniques including self-defense with parasols and hat pins. Their fighting style gained the nickname 'Suffrajitsu' and they resisted arrest, and went into combat with the police to protect the leaders of the movement. An upcoming play celebrating the 'bodyguard' is due to begin touring this Autumn - details here: Suffrajitsu.

At the end of Argyll Street stands iconic department store Liberty's which sold tricolour ribbons for the suffragettes but later became the target of their window smashing campaigns. Today, they have a series of windows celebrating the centenary with photography by Mary McCartney (daughter of Paul and Linda) depicting strong women with a background of suffragette colours and slogans.


From there we ventured down Regent Street in search of the elusive entrance to Suffragette City . Hint - it is behind the green door.


The National Trust have recreated the WSPU HQ. Visitors embark on an immersive experience which takes them through the trials of a real-life suffragette. Upstairs there is a wonderful teashop where I caught up with producer and director Helen Scarlett O'Neill and Executive producer and London Creative Director of the National Trust, Joseph Watson.

I interviewed Helen about her role and the response from the visitors so far - read the full interview here.

After a quick purchase of the guide book we bade farewell to the Pavilion and I hopped into a taxi for my next appointment - a Tatty Devine suffragette jewellery-making workshop at the Museum of London.

The Tatty Devine crew made everyone welcome and set about explaining how to make our necklaces.  I sat with Hajira from the Government Equalities office who shared with me her wealth of knowledge about the Centenary cities projects across the UK.

Also on the course was author Emelyne Godfrey who is currently writing a book about suffragette Kitty Willoughby Marshall. Kitty was one of the 'Bodyguard' and Emelyne is an expert on suffragette Jiujitsu and Victorian self-defence. We talked a little about Edith Garrud and Bartitsu while we worked on our necklaces. More about Bartitsu coming soon....

The workshop flew by with such scintillating conversation and we all left with our own Tatty Devine productions to enjoy.

Finally, I popped into the Museum of London to see their Votes for Women exhibitions and peruse the extensive and marvellous collection of merchandise. I highly recommend it but if you can't get there in person you can visit their online shop.


W is for washing
Which woman must do Day in and day out And on polling day too
If she wants a day off
You had better say ‘Bosh’
And tell her such fanciful notions
Won’t wash.


Thus ended my London walk, I must say a huge thank you to Ruth and Marcus for coming out in the snow to play suffragettes with me and to Peter for braving the cold and taking some shots with a proper camera. Also to the fabulous Suffragette City producers and the Tatty Devine team for their warm welcomes and brilliant centenary projects.

If you met me along the way or just enjoyed this blog please support my efforts and donate - any amount - to CARE here - thank you.