October 18, 2018
Although Hastings is not one of the Suffragette Centenary cities it has a wealth of Suffragette history and it's also where I live so I chose here to do my fourth and final walk.

As it was (finally) a lovely day, I started off in Bexhill with a visit to the local history museum. Here I swooned at the fabulous costume selection and the Elva racecar (Bexhill is the home of British Motor Racing). It's also home to Eddie Izzard's family train set.


In the museum I discovered an(other) inspirational woman I had never heard of before - Annie Brassey;  sailor, writer, photographer, collector and adventurer. Annie sailed around the world with her husband and five children in the 1870's. She collected artifacts and photographs from across the globe. One of her collections was given to the Bexhill Museum by her eldest daughter in 1920. The Huntington Library in California houses a vast collection of her photographs (70 volumes). Her account of the circumnavigation in her schooner  'A Voyage in the Sunbeam' was a bestseller. Annie Brassey's spirit lives on through twitter @anniebrassey and she was the subject of a play at this year's Edinburgh and Hastings Fringe festival.

From Bexhill I walked along the seafront towards Hastings and took a detour to the site of Levetleigh House which was burned down in a suffragette arson attack.  The Pathe news story can be seen here
https://player.bfi.org.uk/free/film/watch-st-leonards-outrage-1913-online
showing the almost comically reckless disregard for health & safety there was in those days.

Suffragette Kitty Marion was an actress-turned-activist and had a reputation for bombing and arson. She set fire to her prison mattress (in protest at being force-fed), a train and the grandstand at Hurst Park Racecourse as well as torching Levetleigh (the home of Hastings MP Arthur du Cros) and a number of other houses. She said "I gritted my teeth and determined that somehow I would fight this vile, economic and sex domination over women which had no right to be, and which no man or woman worthy of the term should tolerate." When the war started she was deported to the U.S. where she dedicated her energy to campaigning for birth control and was instrumental in the formation of what later became Planned Parenthood.  > Read more about Kitty


Nearby there is a blue plaque on the home of a different kind of firecracker - local suffragette Elsie Bowerman. Elsie and her mother Edith joined the WSPU while Elsie was studying at Cambridge. After graduation, they embarked on a journey to New York on the Titanic. They were lucky enought to get into a lifeboat and helped with the rowing to keep warm. During WW1 Elsie travelled to Serbia as a volunteer orderly with the Scottish Women's hospital and witnessed the Russian Revolution first-hand. She returned to the UK and at the age of 31 decided to study law, she was called to the bar in 1924 and was the first female barrister to appear at the Old Bailey.  There's a fascinating account of her life by local historian Helena Wojtczak here. 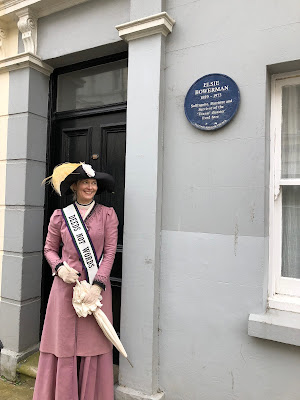 From there I walked down to the seafront and mingled with vintage bicycle enthusiasts (Twig and Sarah) and William the Conequeror (the ice cream man).

Working my way up to Hastings, I met and chatted with a really sweet 6 year-old boy, Gabriel, walking with his family. He told me all about the suffragettes, the colours they wore and about the awful force-feeding they endured in prison.

I eventually reached the graceful curve of Regency Pelham Crescent, once home to Barbara Leigh Smith Bodichon and Muriel Matters.

Barbara Bodichon was an artist who began one of the first women's rights organisations in the 1850's with a group called the 'Ladies of Langham place'.  She wrote and published the pamphlet 'A Brief Summary in Plain Language of the Most Important Laws Concerning Women' and started the English Women's Journal which promoted equality of opportunities for women in employment, education and property ownership. She joined with a number of other women artists to petition for women to enter the Royal Academy but they were not successful. The first woman who was granted a place was Annie Swynnerton (who you can read about Annie in my Manchester post).

Muriel Matters moved to the UK from Australia to pursue a music career. Once in London she began working as a journalist to supplement her musical work and through that she met radicals and intellectuals, began discussing politics and joined the Women's Freedom League to campaign for the right to vote. Muriel toured South East England giving speeches and establishing new branches of the WFL. She is famed for her spectacular tactics to draw attention to the cause - chaining herself to a grille inside the Houses of Parliament and distributing leaflets across London from a hot air balloon.

In 1924 she stood as the Labour party candidate for Hastings but was defeated.  In 2017 Hastings Borough Council honoured her by renaming  the main Council offices 'Muriel Matters House'. 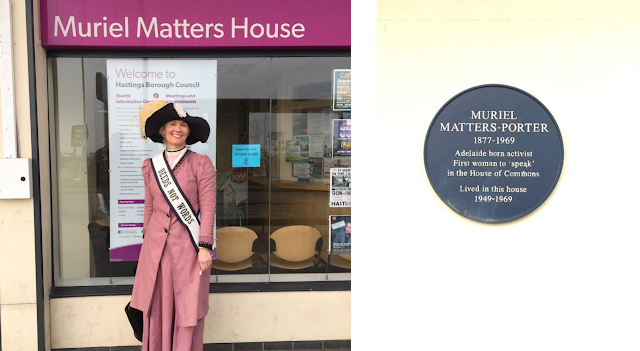 I wound up my tour with a visit to the site of the Hastings WSPU office, no. 8 Claremont. It is now  'Scoffers' and sadly there is no clue to the activities that took place there. 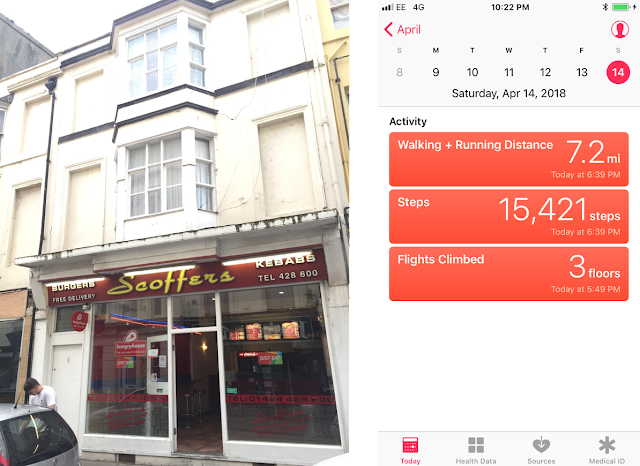 Following on from that weekend Hastings Women's March took place on a beautiful day. Around 200 women dressed as suffragettes and marched through Hastings to the church at St Mary's for a performance of Suffragette songs and the Pankhurst anthem. 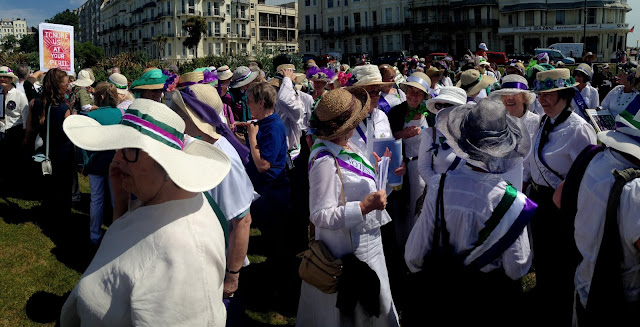 If you met me along the way or just enjoyed this blog please support my efforts and donate - any amount - to the critical work CARE do to raise women and girls out of poverty across the world - thank you. Either through the link below or Text SUFF98 £3 to 70070  (£3 is a suggestion - any amount appreciated) - thank you.