March 13, 2018
Manchester was the birthplace of the suffragette movement and where Emmeline Pankhurst set up the WUSP from her home in Nelson Street.

The natives were friendly and as I stepped off the tram a few people asked for photos. These ladies were dressed up for a tea party and looked spectacular.

and there were signs all around the city highlighting the centenary and celebrating strong Manchester women. 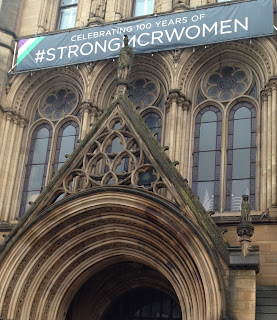 I missed some great International Women's Day events but I did arrive in time to hear a talk about the Peterloo Massacre in the Central library given by Dr. Robert Poole.

In 1819, a peaceful protest for greater representation (at a time when only 2% of the population had the vote) turned into a bloodbath when the cavalry attacked protesters with swords and batons killing 18, including women and children and injuring some 400 more. A reminder that the democracy we now take for granted was not handed to us on a plate and even men had to fight for the right to vote. Find out more at peterloo.org.

I visited the Free Trade Hall (now the Radisson Blu hotel) which was the site of the Peterloo massacre and where Christabel Pankhurst and Annie Kenney were arrested in 1905 for interrupting a Liberal party meeting by demanding women's rights. They were taken to Strangeways prison where Annie Kenney served four sentences in total.


On the way to prison I passed a billboard featuring Jay Cahill, Parajujitsu Gold Medalist https://www.parajiujitsu-gb.co.uk/athletes
The suffragettes trained in Jiu jitsu to defend themselves and their leaders from the police and this is the subject of a documentary 'No Man Shall Protect Us: The Hidden History of the Suffragette Bodyguards' due for release soon http://www.bartitsu.org/index.php/category/suffragette-jiujitsu/

Next stop was the Manchester Art Gallery where suffragettes  attacked a number of paintings in 1913. Today, it houses an exhibition of works by suffragist Annie Swynnerton. Annie was the first female member of the Royal Academy and had campaigned for women's voting rights for decades http://manchesterartgallery.org/exhibitions-and-events/exhibition/annie-swynnerton-painting-light-and-hope/
The gallery showcased suffragette merchandise and a selection of Sylvia Pankhurst's paintings and drawings.

In St Peter's Square I stood on the spot where a statue of Emmeline Pankhurst is due to be unveiled at the end of 2018. 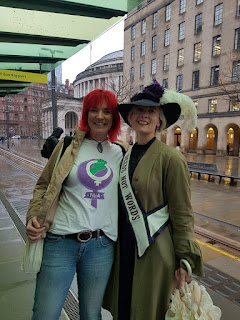 I met Lisa-Marie Taylor, relative of Sylvia Pankhurst and CEO of the FiLiA organisation - which promotes human rights, equality & diversity and women's art. The conference brings together women from around the globe to discuss the issues that affect us. The next one takes place 20/21st October in Salford. See  FiLiA Conference for details. 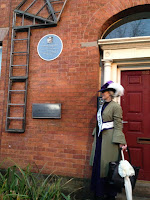 No suffragette tour of Manchester would be complete without a visit to the Pankhurst Centre, once home to Emmeline and her daughters which now houses a museum and Manchester Women's Aid, providing housing and practical support for women fleeing abuse http://www.thepankhurstcentre.org.uk/

It was closed on Saturday so I could  only admire the blue plaque outside  but I will certainly go back to see the garden later in the year which was crowdfunded in December 2017 and will create a refuge and place of tranquility for women and children details here: Plant a seed for gender equality

I had a wonderful experience in Manchester, learned and saw so much, met warm and enthusiastic people and walked 8.6 miles for Walk in her Shoes.

Enormous thanks due to Val and Trevor for accompanying me, doing the research and taking photos xx 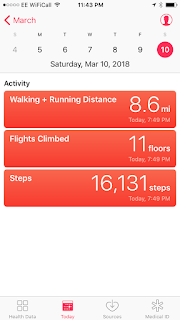 If you met me along the way or just enjoyed this blog please support my efforts and donate - any amount - to CARE here - thank you.