Lucienne Boyce is a Bristol-based author who writes historical fiction and non-fiction. She has published three historical novels set in the eighteenth century, and a history of the suffragette movement in Bristol and the west country. Her website and blog are rich resources for suffragette information and Lucienne is collecting personal stories from people with suffragettes in their family - if you have one of those do get in touch and contribute to this collection of social history. 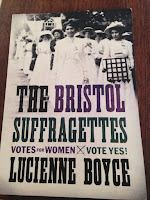 Q. What prompted you to write 'The Bristol Suffragettes'?

I became interested in the history of the women’s suffrage movement when I lived in London but like many people, I had the impression that was where it all happened. However, a few years later I moved to Bristol and was rummaging though a postcard stall in St Nicholas Market when I came across a photograph of a group of local women standing under a suffrage banner. That was when I realised that the movement was not just in the capital, but all over the country. From then I was hooked on finding out about Bristol’s suffrage history. Of course, nowadays we are all much more aware of the local aspects of the movement and lots of people are doing fantastic work on local history.

Q: What activities are you involved with  / looking forward to this year which celebrate the Centenary?

Goodness, where to start! I’ve done more talks than I can keep count of, as well as radio and television interviews, with lots more events coming up. I’m also in the middle of a fund raising campaign for a Blue Plaque at the house where Bristol’s first women’s suffrage society was founded, with the generous permission and support of the owner. [Click here for more info and to donate].

But the biggest thing on my horizon is a day of commemorative events I’m organising and participating in with the West of England and South Wales Women’s History Network – I’m a member of the steering committee -  at Bristol MShed on Saturday 30 June. There will be talks, a walk, the showing of the film Make More Noise: Suffragettes in Silent Film, the performance of Cicely Hamilton’s 1910 comedy How the Vote Was Won, a panel event looking at what the vote has achieved and what has yet to be achieved, and much more! The WESWWHN is working in partnership with Bristol MShed, Bristol Libraries, the University of Bristol and the University of the West of England – and there’s more information at https://www.lucienneboyce.com/diary/

Frustratingly, though, with all this going on I haven’t got as much time as I’d like to spend on the biography I’m writing of suffrage campaigner Millicent Browne, so I’m looking forward to being able to get on with that when the commemoration’s out of the way.

Q: Picking up on the aims of the Suffragettes - what are your hopes for the future in  terms of women's rights?

Well, I think we are all aware that many of the issues the suffrage campaigners were concerned about – equal opportunities, equal pay, better health care provision and so on – are still a long way from full achievement. But if I had to pick one goal pursued by many suffrage campaigners – women like Emmeline Pethick Lawrence or Mabel Tothill, both of Bristol, who were involved in the founding of the Women’s International League for Peace and Freedom – it would be peace work. Inequality is at the root of conflict – so my hope for the future is that we will do away with inequality to arrive at a just and peaceful world.

If you would like to buy Lucienne's book The Bristol Suffragettes - it's available at all the big stores (Amazon, Waterstones, Foyles) or you can order a signed copy directly from the author (which is what I would do if I hadn't bought one in a hurry because I needed the map for my Bristol walk).

Well, the weather was freezing, it was wild, windy and snowing but nevertheless, I persisted in carrying out my planned walk of London (with trusty companions, Ruth and Marcus). There are so many suffragette related sites in London I couldn't visit them all. Therefore I walked between some major sites and stopped off at two special, centenary events. Hyde Park w as the scene of regular suffragette meetings and speeches. It was also wh ere, on June 21st 1908, a spectacular procession, a 'monster meeting' took place. 30,000 suffragettes carrying 700 banners converged and drew crowds of 300,000 - 500,000 onlookers. This marked the introduction of the  WSPU 'brand colours' of green, white and purple. It was the largest number of people gathered in Hyde Park for political purpose ( source: Kent.ac.uk ) and the park was awash with suffragette colours in the clothing, banners and sashes of the activists. The colours had meaning - purple for dignity and loyalty, white
4 comments
Read more

Manchester was the birthplace of the suffragette movement and where Emmeline Pankhurst set up the WUSP from her home in Nelson Street. The natives were friendly and as I stepped off the tram a few people asked for photos. These ladies were dressed up for a tea party and looked spectacular. Manchester was re-named 'WoManchester' for International Women's Day https://www.prolificnorth.co.uk/news/marketing-services/2018/03/manchester-rebrands-womanchester-international-women’s-day and there were signs all around the city highlighting the centenary and celebrating strong Manchester women. I missed some great International Women's Day events but I did arrive in time to hear a talk about the Peterloo Massacre in the Central library given by Dr. Robert Poole. In 1819, a peaceful protest for greater representation (at a time when only 2% of the population had the vote) turned into a bloodbath when the cavalry attacked protesters with swords and batons killing
Post a Comment
Read more

Although Hastings is not one of the Suffragette Centenary cities it has a wealth of Suffragette history and it's also where I live so I chose here to do my fourth and final walk. As it was (finally) a lovely day, I started off in Bexhill with a visit to the local history museum. Here I swooned at the fabulous costume selection and the Elva racecar (Bexhill is the home of British Motor Racing). It's also home to Eddie Izzard's family train set. Bexhill Museum - the Izzard family history book, amazing frocks and the Elva In the museum I discovered an(other) inspirational woman I had never heard of before - Annie Brassey;  sailor, writer, photographer, collector and adventurer. Annie sailed around the world with her husband and five children in the 1870's. She collected artifacts and photographs from across the globe. One of her collections was given to the Bexhill Museum by her eldest daughter in 1920. The Huntington Library in California houses a vast collec
Post a Comment
Read more